Check out The Foally of Man, a podcast featuring Chris the Brony and Robert the non-Brony as they explore Fallout: Equestria chapter by chapter. Watch/listen on YouTube, Libsyn, Twitter, and PodBean.
Solowing51

Added:
Saturday, August 9th, 2014
Last Update:
Saturday, November 21st, 2015
Favorited By:
Be the first to favorite this story!
Dark, Crossover, Adventure, Alternate Universe
I was just a simple stallion. Living life day to day with family and loved ones. We lived a generally safe life given the situation of the world around us. That was before the entire world came tumbling down on top of us however. What started as just another simple day of living a seemingly normal life quickly turned into a literal hell on Equestria. Amidst the blazing inferno and smoking ruins of my old life however, rose a being that all would someday know to fear. Amongst the burnt remains rose the spirit of vengeance. 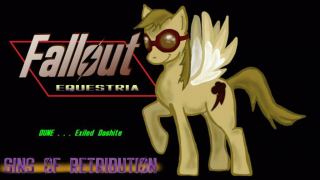