Check out The Foally of Man, a podcast featuring Chris the Brony and Robert the non-Brony as they explore Fallout: Equestria chapter by chapter. Watch/listen on YouTube, Libsyn, Twitter, and PodBean.
Ebonmane

Added:
Tuesday, November 4th, 2014
Last Update:
Monday, July 20th, 2020
Favorited By:
Be the first to favorite this story!
Romance, Sad, Dark, Crossover, Adventure, Alternate Universe
Ebonmane was born an alicorn. Other than that, his youth in Junction Town wasn't terribly remarkable, except for his deep admiration of the hero, Littlepip and the other heroes that he is surrounded by. When he becomes a town watchpony, it's business as usual until a series of events puts him on the path to hunt down a kingpin of the Wasteland's sex trade industry. But diving into the dark heart of the Wasteland reveals a mote of light; a chance to rebuild the Equestria to its former glory. No one is certain that Equestria can be saved. But Ebonmane believes in Littlepip's light, and what she stood for. Whether those beliefs are true virtues or foalish dreams remains to be seen, but if Ebonmane wants to succeed, he'll be forced to hold true to his convictions or discover just how dark reality can be. Intended to be a direct sequel to K-Kat's original masterpiece. Cover art done by my lovely fiancee. Now with end-chapter analysis questions for the deep readers! 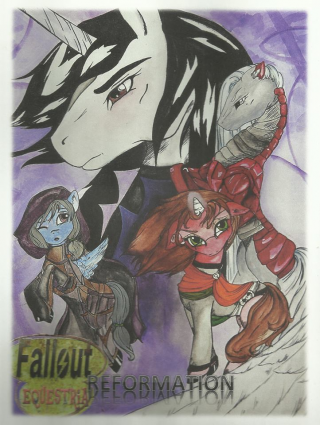