Check out The Foally of Man, a podcast featuring Chris the Brony and Robert the non-Brony as they explore Fallout: Equestria chapter by chapter. Watch/listen on YouTube, Libsyn, Twitter, and PodBean.
ComicSansPony

Added:
Wednesday, November 5th, 2014
Last Update:
Saturday, March 5th, 2016
Favorited By:
Be the first to favorite this story!
Romance, Dark, Crossover, Adventure, Alternate Universe
Clash Coat has endured years of discrimination in Stable 13, a stable focused on genetic superiority. Her own mother, the Overmare, can't stand her because she doesn't fit the twisted Gold Standard for beauty. After a mishap with one of the Desirable mares Clash decides it would be best to leave her unlucky stable behind and face the Equestrian Wasteland. Where the fight to stay alive outweighs the need for good looks. Before leaving, Clash discovers an odd ability that allows her coat to shimmer like a crystal and it is tied to her emotional state. What is this mysterious power? Do the answers lie somewhere in the wasteland? Will she survive long enough to find out? 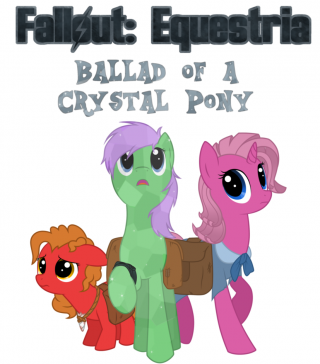