Check out The Foally of Man, a podcast featuring Chris the Brony and Robert the non-Brony as they explore Fallout: Equestria chapter by chapter. Watch/listen on YouTube, Libsyn, Twitter, and PodBean.
THEARTIFICAILINTELIGENCE

Added:
Wednesday, November 5th, 2014
Last Update:
Friday, November 21st, 2014
Favorited By:
Be the first to favorite this story!
Crossover, Adventure, Alternate Universe
Skyfire is declaired a triator by the enclave for refusing to kill a group of foals hidding in a ruin which he had been sent to clear with his squad. Only he had returned and thus lead to him being classed as a traitor. After escaping his death by his comrades he hides inside a cave that is half collapsed. Still in his hellfire armour, he stays there for a couple of days. However this caves secret shall shortly be revealed to him. but where will this lead him? 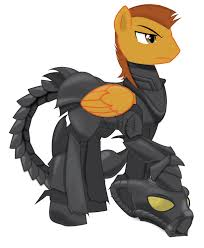