Check out The Foally of Man, a podcast featuring Chris the Brony and Robert the non-Brony as they explore Fallout: Equestria chapter by chapter. Watch/listen on YouTube, Libsyn, Twitter, and PodBean.
Recon777

Added:
Saturday, January 17th, 2015
Last Update:
Thursday, May 25th, 2017
Favorited By:
Be the first to favorite this story!
Dark, Crossover, Adventure, Alternate Universe
The alicorn Nyx Sparkle, formerly Nightmare Moon, must confront her darkest temptations in the delicate balance between protecting the ponies she loves and losing her own identity. Nyx and her friends face a brutal, new threat to Equestria during the Great War against the zebras and uncover the sinister ambition of a powerful adversary that threatens ponies and zebras alike. Note: This is a standalone story. It is not necessary to have read either Past Sins or Fallout: Equestria to enjoy this story. 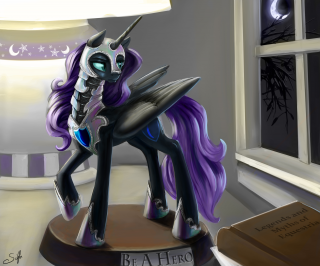