Check out The Foally of Man, a podcast featuring Chris the Brony and Robert the non-Brony as they explore Fallout: Equestria chapter by chapter. Watch/listen on YouTube, Libsyn, Twitter, and PodBean.
Spoiler Alert

Added:
Monday, February 9th, 2015
Last Update:
Tuesday, January 13th, 2015
Favorited By:
Be the first to favorite this story!
Dark, Crossover, Adventure, Alternate Universe
Pepper Bell awakes one morning to find that much of her group's contraband supply has been stolen overnight and now has to track down the ones responsible. What would have been a simple yet tedious task of getting their merchandise back turns into a violent pursuit with city authorities. Along the way, Pepper stumbles upon a stray pair of twins who are searching for their long lost parents and they inadvertently get caught up in the criminal's troubles. Forced to flee from their city in the clouds, they all escape to the twisted and barren wasteland below that was once called Equestria. With no other choice, Pepper Bell and the twins have to learn to survive together and maybe, just maybe, make it out of the wasteland in one piece. [rule] [i]A spin-off of Kkat's story: [b][url=http://www.fimfiction.net/story/119190/fallout-equestria]Fallout: Equestria[/url][/b].[/i] 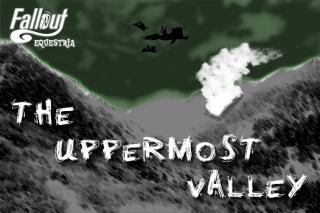