Check out The Foally of Man, a podcast featuring Chris the Brony and Robert the non-Brony as they explore Fallout: Equestria chapter by chapter. Watch/listen on YouTube, Libsyn, Twitter, and PodBean.
hotshotgamer117

Added:
Saturday, December 12th, 2015
Last Update:
Friday, May 12th, 2017
Favorited By:
Be the first to favorite this story!
Adventure, Alternate Universe, Crossover
The bombing of Equestria affected everypony, some more than others. The 200 year aftermath turned the surface into a harsh wasteland full of nothing but mindless savages, hardly a scrap left of the civilization that used to be. But the pegasi above, thanks to the Enclave and it's cloud layer, are shielded from the hardships and insanity of those on the surface. The Enclave has always protected us from the horrors bellow. At least, that's what Hotshot used to believe. But opinions can change quickly, especially after betrayal. When a thought to be successful assassination attempt crashes Hotshot onto the surface, heavily wounded and stranded in the middle of nowhere, he finds a hidden bunker that might be able to offer some shelter and a place to rest. But what lies inside could change his life forever. Then he starts learning things... things the Enclave has been lying about. Well, you now what they say... any landing you can walk away from... 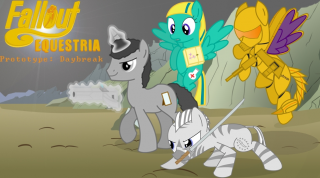