Check out The Foally of Man, a podcast featuring Chris the Brony and Robert the non-Brony as they explore Fallout: Equestria chapter by chapter. Watch/listen on YouTube, Libsyn, Twitter, and PodBean.
The Amateur

Added:
Friday, January 15th, 2016
Last Update:
Sunday, May 17th, 2020
Favorited By:
Be the first to favorite this story!
Adventure, Crossover, Dark, Tragedy
Baltimare is an okay place to live. With a lot less radiation to worry about and a bustling food market, civilization appears to be regaining its footing. Visitors are simply asked to avoid the wildlife, the swamps, the raider corporation, the ongoing slaver–hellhound-Steel Ranger war, the drought, and any travel outside the republic. Comet Scotia is a visitor to the Southern Wasteland. But she makes a fatal mistake (well, fatal for someone else) and winds up playing the role of a hero destined to bring sunshine and rainbows to Equestria. A profitable scheme at first, the lie drags Comet into a world of intrigue, deception, and illusions. That and a lot more lying. Inspired by Kkat's original story. 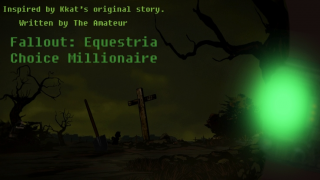 Chapter One: Twist in the Scheme, a Permeating Theme
Jan 3rd, 2016

Chapter Two: To Breathe the Name of your Savior
Jan 8th, 2016

Chapter Four: And We Fought to Believe the Impossible
Jan 31st, 2016

Chapter Ten: By Tomorrow Dubbed a Mystery and the Past Just Blurry Lines
May 17th, 2017