Check out The Foally of Man, a podcast featuring Chris the Brony and Robert the non-Brony as they explore Fallout: Equestria chapter by chapter. Watch/listen on YouTube, Libsyn, Twitter, and PodBean.
Solaris Rin Ursa

Added:
Saturday, September 3rd, 2016
Last Update:
Monday, August 1st, 2016
Favorited By:
Be the first to favorite this story!
Adventure, Alternate Universe, Comedy, Crossover, Dark
Not everything is quite what it seems, unless it seems like the world turned into a barren wasteland full of terrifying monsters and the fact that everypony is crazy enough to kill for water and food. Then yes it’s exactly how it seems, it’s been one-hundred and thirty-seven years sense Equestrian and the Zebra mega spells went off and killed almost everything in their path. But you didn’t come here for a history lesson about some trivial things that wiped out your ancestors. My names Scattered Hope, but you can call me Sixes. I got my nickname from my love of revolvers and my knack to carry everything I have in multiples of six. Ya it causes problems when I go out looting but I don’t do that much. You see I’m a Mercenary I belong to a group called The Forgotten Eden, and we go around taking jobs and doing what we’re paid to do. But before you ask yourself “does that include killing innocents and the more inappropriate things in the waste land?” For one we aren’t raiders as I’ve stated already we’re Mercs, and we at least have morals. Second, sense when in the wasteland is anypony innocent? 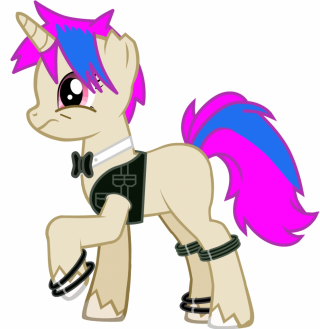