Check out The Foally of Man, a podcast featuring Chris the Brony and Robert the non-Brony as they explore Fallout: Equestria chapter by chapter. Watch/listen on YouTube, Libsyn, Twitter, and PodBean.
MeetSouder

Added:
Saturday, September 3rd, 2016
Last Update:
Monday, July 25th, 2016
Favorited By:
Be the first to favorite this story!
Adventure, Alternate Universe, Crossover, Romance
Stories are passed down generation after generation. Over time the tales become mixed and confused, history gets intertwined with legend. As the years go by, even prophecies, warnings of things to come, are melded into simple marestales spoken to young ones at night. Details may be forgotten - however, the weight of which they warn is not. [center]* * *[/center] Stable 17 was built within the region of Transylvania in northwestern equestria, safely situated between the base of Smokey Mountain and Vanhoover. The primary focus of the stable was to protect the native Thestral ponies who resided in the area in the event of a catastrophic war. These ponies -- commonly known as "Batponies" by the other races of Equestria -- sported fangs and leathery wings. Transylvania, with its economy driven mainly by the farming of it's residents, saw little to no action in the war, and was blissfully left out of the rain of balefire bombs that consumed Equestria. [center]* * *[/center] Midnight, at least that's what they call me. I grew up within the confines of Stable 17 where I was certain I would live peacefully, and die peacefully. I was to be yet another participant in the endless cycle that made up life in Stable 17, call it boring, but it was home. When the current Overmare began a crazy attempt to keep her power, I was forced out of the stable, finding myself stuck out in the open world of the Equestrian wasteland. With no supplies, friends, or knowledge of the wasteland before me, I found myself facing a life that was sure to end quickly. As if that wasn't enough, another pony was kicked out with me; none other than Scarlet Rose, the Overmare's own sister. Soon after leaving the Stable, I learned of a land far from Equestria, perhaps not even of this same world. A mystical being by the name of Ignis revealed himself to me and informed me of my destiny. Cliche, am I right? Well, as soon as that all began, I learned of something sinister lurking between worlds, something that only I could prevent. Night by night, secrets tucked away within the forested overgrowth of Transylvania's lands began to become ever present, every step that Scarlet and I took seemed to wake dormant beings. Ancient legends - regarded as simple tales - quickly became a reality. Scarlet and I not only had to overcome our differences, but together we were tasked to protect the sovereignty of Transylvania, the very existence of our dying Thestral race. 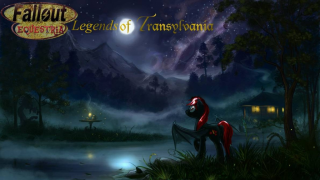