Check out The Foally of Man, a podcast featuring Chris the Brony and Robert the non-Brony as they explore Fallout: Equestria chapter by chapter. Watch/listen on YouTube, Libsyn, Twitter, and PodBean.
Quantum Mechanic

Added:
Saturday, November 26th, 2016
Last Update:
Thursday, April 27th, 2017
Favorited By:
Be the first to favorite this story!
Adventure, Alternate Universe, Crossover, Dark
[b]Once upon a time, in the magical land of Equestria...[/b] The skies rained green balefire and the lands that were struck were obliterated and a new era began instantly. The era of the Wastelands. Though most of the members of the dominant species were turned to ash when the bombs fell, thousands were saved by the use of Stables hidden all over the once beautiful landscape. There were 101 stables each with their own traits that made them different. Stable 37, a massive stable located in the ravaged outskirts of Detrot Michigan, was one such example. A pegasus stallion named Quantum did not know nor did not need to know about the horrors of the Wasteland outside. He never imagined that he needed to... 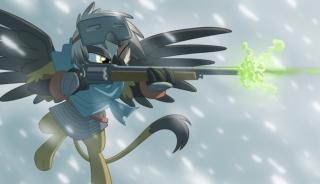