Check out The Foally of Man, a podcast featuring Chris the Brony and Robert the non-Brony as they explore Fallout: Equestria chapter by chapter. Watch/listen on YouTube, Libsyn, Twitter, and PodBean.
Anon3mous1

Last Update:
Tuesday, November 5th, 2019
Favorited By:
Be the first to favorite this story!
Crossover, Adventure, Alternate Universe, Human
Once upon a time, on the not-so-magical planet Earth. There was a US Marine who signed up to defend his country. He was assigned to a fire team, the fire team assigned to a squad and the squad assigned to a company. Together they defended the area surrounding a Forward Operating Base in Afghanistan from insurgents. If only it were that simple. When lone Marine is transported to Equestria only he finds a post-apocalyptic wasteland. With no orders, no resupply and seemingly no hope of return, he sets out to find what brought him here, and why. Strong Language Warning: He swears like a Marine. Disclaimer: I'm not a Marine 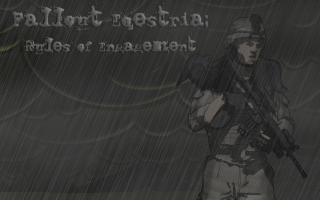