Check out The Foally of Man, a podcast featuring Chris the Brony and Robert the non-Brony as they explore Fallout: Equestria chapter by chapter. Watch/listen on YouTube, Libsyn, Twitter, and PodBean.
Faindragon

Added:
Thursday, July 12th, 2012
Last Update:
Monday, April 8th, 2013
Favorited By:
Be the first to favorite this story!
Dark, Crossover, Adventure
"The only thing I can remember is waking up in a clinic, sealed inside a room..." Nearly two hundred years after the Great War, an earth pony awakes from stasis in a Ministry of Peace clinic -- parts of his body replaced, and his memories gone. Without knowing anything about what awaits him, he leaves the safety of the clinic for the Equestrian Wasteland, in search of that which he can no longer remember. 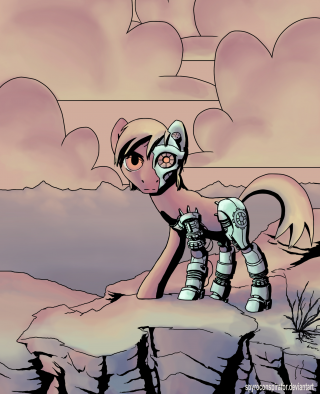