Check out The Foally of Man, a podcast featuring Chris the Brony and Robert the non-Brony as they explore Fallout: Equestria chapter by chapter. Watch/listen on YouTube, Libsyn, Twitter, and PodBean.
SubjectSigma77

Added:
Monday, September 17th, 2012
Last Update:
Saturday, November 17th, 2012
Favorited By:
Be the first to favorite this story!
“Hey! Hey! Hey!” Melody Flight poked Sigma’s side with each word. He slept in again and she was getting bored waiting for him to wake up. Ten’ and her were had been up for a whole 10 MINUTES! How could he sleep this long!? The answer was lost to the sand colored pegasus mare. Sigma’s light green hoof flailed out but failed to strike the mare, who took to the air if only a few feet high. Sigma let out an exhausted grunt and turned over, trying to ignore her. Melody wasn’t having any of his attitude. She landed, standing over him with a stern look. Sigma took notice of the sudden blockage of the light. He opened his eyes to the sight of Melody’s annoyed, red, gaze. 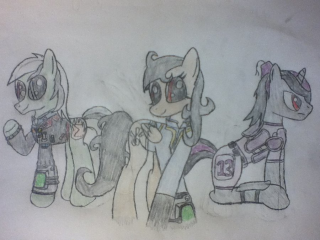