Check out The Foally of Man, a podcast featuring Chris the Brony and Robert the non-Brony as they explore Fallout: Equestria chapter by chapter. Watch/listen on YouTube, Libsyn, Twitter, and PodBean.
Shukin

Added:
Tuesday, January 15th, 2013
Last Update:
Sunday, January 13th, 2013
Favorited By:
Be the first to favorite this story!
Crossover, Adventure, Alternate Universe
Rufus is a griffon merchant that got caught in a raider ambush, losing everything he had and being wounded in the process. Falling close to a abandoned settlement in the middle of an aircraft cemetery, he's rescued by one of its denizens and given medical treatment. With his wounds, he's got no choice than help the small village made of scrap and airplane pieces with everything he's possible to do. Razor's Edge isn't a story about violence, or destruction. It's a story about remaking society, of standing up against all odds and thrive, about political warfare and secret plots. It's the story of a merchant turning himself into a leader, and a leader turning himself into a legend. 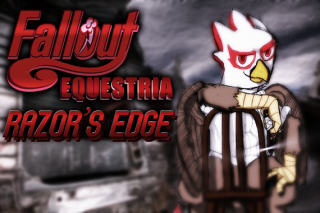