Check out The Foally of Man, a podcast featuring Chris the Brony and Robert the non-Brony as they explore Fallout: Equestria chapter by chapter. Watch/listen on YouTube, Libsyn, Twitter, and PodBean.
SlowbroNE

Added:
Sunday, February 24th, 2013
Last Update:
Sunday, April 7th, 2013
Favorited By:
Be the first to favorite this story!
Sad, Dark, Crossover, Adventure, Alternate Universe
When Stable Forty-Seven's door opened the zebras which inhabited it found themselves to be the last remaining survivors of the war. They began to rebuild their lost civilization outside their Stable in a grove surrounded by a poisonous woodland. Life was simple yet dreary for the derelict son two of the tribe's prominent members. Zythus a zebra of no particular strength or talent existed only to be with his wife, raise his foals, and brew mead from the honey gathered from the forest. Recently Zythus found himself on a path of self-destruction. After failing at practically every aspect of his tribal life he finds himself caught in the middle of deadly conspiracy. 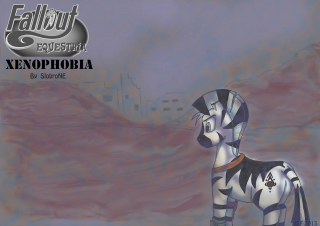