Check out The Foally of Man, a podcast featuring Chris the Brony and Robert the non-Brony as they explore Fallout: Equestria chapter by chapter. Watch/listen on YouTube, Libsyn, Twitter, and PodBean.
RadiationRed

Added:
Monday, April 22nd, 2013
Last Update:
Monday, September 30th, 2013
Favorited By:
Be the first to favorite this story!
Dark, Crossover, Adventure
Betrayed by her own community in Stable 9, Euphoria, an unwilling testpony, is left to her own devices in the wasteland, so she decides to do the only thing she can: find the ponies responsible for attacking her home, and bring them to justice. But her quest soon drags her into more heinous plots, that might implicate her Stable in things far more dangerous than brutal Raiders. 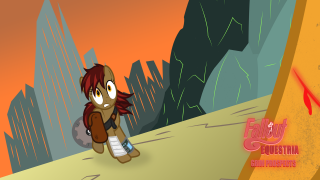