Check out The Foally of Man, a podcast featuring Chris the Brony and Robert the non-Brony as they explore Fallout: Equestria chapter by chapter. Watch/listen on YouTube, Libsyn, Twitter, and PodBean.
hahatimeforponies

Added:
Sunday, November 3rd, 2013
Last Update:
Saturday, November 30th, 2013
Favorited By:
Be the first to favorite this story!
Dark, Comedy, Crossover, Adventure, Alternate Universe
After unwittingly rescuing some prisoners from a band of slavers, Atom Smasher is hailed as a hero by the citizens of the little town of Colton, and ponies are falling over each other to sing her praises and send her on borderline-pointless errands. However, Atom might be just about the last pony the Mareseyside wasteland wants as its champion. Not because she just fell out of the never-finished Stable 512 - it's that she might actually have less of a conscience than the raiders, slavers, bandits and baddies she's been charged with fending off. Who's this Little Pip everyone keeps talking about? [size=12][i]A satirical Fallout Equestria story where the messianic Stable Dweller turns out to be an unfettered thrill-seeker with no moral compunction, or in other words, the average gamer. This story is also a NaNoWriMo challenge, in which I attempt to write 50,000 words in 30 days.[/i][/size] 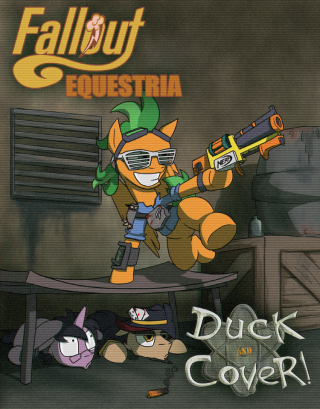 The Wasteland Steel Industry Has A Horrible Reputation
Nov 9th, 2013