Check out The Foally of Man, a podcast featuring Chris the Brony and Robert the non-Brony as they explore Fallout: Equestria chapter by chapter. Watch/listen on YouTube, Libsyn, Twitter, and PodBean.
pvtread

Added:
Friday, December 13th, 2013
Last Update:
Sunday, August 7th, 2016
Favorited By:
Be the first to favorite this story!
Romance, Tragedy, Sad, Dark, Crossover, Adventure
When all you have is suddenly taken from you what do you do? Firing Pin is your average screw up, but when his non attention to detail gets another pony killed, the Overmare of his stable, instead of handing down a death sentence instead decides to kick him out of the stable. Not however before his best friend/marefriend finds information on something called The Iron Fish. Ever curious he soon finds himself involved in more than he could ever imagine. Is the world as anypony knows it about to be plunged once again into a hell of fire and dark magic once more? 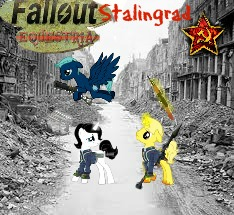