Check out The Foally of Man, a podcast featuring Chris the Brony and Robert the non-Brony as they explore Fallout: Equestria chapter by chapter. Watch/listen on YouTube, Libsyn, Twitter, and PodBean.
Defender9to5

Added:
Saturday, June 7th, 2014
Last Update:
Saturday, August 22nd, 2015
Favorited By:
Be the first to favorite this story!
Romance, Tragedy, Sad, Crossover, Adventure
When two brothers are branded dashites by the enclave they must learn how to survive in the equestrian wasteland and get their revenage. Big thanks to Titan2955 for the front cover 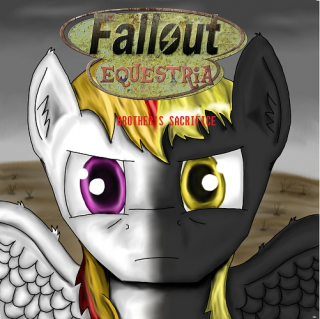