Check out The Foally of Man, a podcast featuring Chris the Brony and Robert the non-Brony as they explore Fallout: Equestria chapter by chapter. Watch/listen on YouTube, Libsyn, Twitter, and PodBean.
Endless Madness

Added:
Wednesday, June 18th, 2014
Last Update:
Saturday, June 28th, 2014
Favorited By:
Be the first to favorite this story!
Dark, Crossover, Adventure
Stable 6, a bomb shelter created before the Great War, is opening its door for the first time in over two hundred years. Fizzy Pop, a young mare who's known nothing but the happiness of her underground home, is greeted to a world so horrifying that it makes her addiction to Sparkle Cola the least of her problems. A stallion named Dirt has been cheated of his money and his father's gun and must now pursue the mare who mugged him using the only assets he has left: his muscles and his resolve. But will he be able to accomplish his goals on his own? Night Shade, who wishes for nothing more than to escape the long shadow of the Grand Pegasus Enclave, is thrown into a world where everypony is her enemy. Can she prove them wrong, or will she become the monster that she's perceived to be? But when these three strangers meet for the first time, they realize that their true strength lies within their friendship. 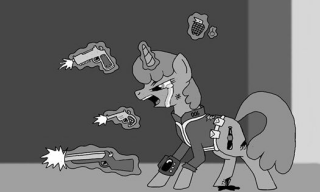