Check out The Foally of Man, a podcast featuring Chris the Brony and Robert the non-Brony as they explore Fallout: Equestria chapter by chapter. Watch/listen on YouTube, Libsyn, Twitter, and PodBean.
NobbleyKyle

Added:
Thursday, August 28th, 2014
Last Update:
Monday, August 3rd, 2015
Favorited By:
Be the first to favorite this story!
Dark, Comedy, Crossover, Adventure, Alternate Universe
Three highly capable but down on their luck bounty hunters stumble upon the job of a lifetime when a seemingly random stable pony has an enormous bounty placed on her head. Upon capturing the mare the trio learns there's a lot more to the job than they originally thought and end up defending their prize from every other bounty hunter, mercenary and scumbag in the wasteland. Along the way, their captive will discover that there's more to these ponies than meets the eye, and if she's going to find a way out of this mess she'll have to learn to trust them. One way or another she'll discover that normal ponies don't exist in this world. Everyone's a little strange. Everyone's a little crazy. If you want to survive in the equestrian wasteland, you may have to get a little dirty. 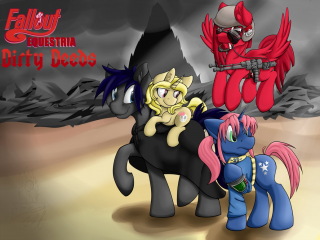