Check out The Foally of Man, a podcast featuring Chris the Brony and Robert the non-Brony as they explore Fallout: Equestria chapter by chapter. Watch/listen on YouTube, Libsyn, Twitter, and PodBean.
TheImmolatedPoet

Added:
Thursday, September 11th, 2014
Last Update:
Friday, October 9th, 2015
Favorited By:
Be the first to favorite this story!
Dark, Crossover, Adventure
FoE: Emergence takes place in an Equestria that has recently been shaken by the events of the original story. Things are beginning to change. There are those looking to nurture this change, leading Equestria to better times. There are those who wish to sculpt it to their will, carving out an Equestria better for themselves. There are most, who simply try to live through each day. And then there's KnickKnack. This aspiring little pony has ambitions and the recent changes in his life have allowed him to [i]finally[/i] pursue them. His want for freedom, adventure and invention are all within his reach - but it comes with a price. His selfishness and ambition will be the cause of much anguish and death, lives that were not his right to gamble with. Will this lead him down a dark path, or will he atone for his selfishness and emerge a better pony? 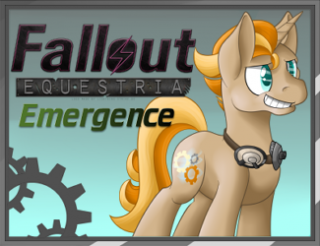