Check out The Foally of Man, a podcast featuring Chris the Brony and Robert the non-Brony as they explore Fallout: Equestria chapter by chapter. Watch/listen on YouTube, Libsyn, Twitter, and PodBean.
Three-star Night

Added:
Thursday, September 11th, 2014
Last Update:
Wednesday, April 8th, 2015
Favorited By:
Be the first to favorite this story!
Dark, Crossover, Adventure
In a desperate gambit to find a superweapon and defeat both Red Eye and the Enclave, a gang called the City Slickers sends a team of six ponies into the recently-discovered Stable 16. Among them is Silver Rivet, a mousey little mare with a unique gift for understanding mechanical devices. She's only here to prove her usefulness to the doubters. To show she isn't a total wimp after all (despite what may or may not be true). Except now she's trapped with the rest of the group in a place that's quickly gone from unpleasant to living hell. Struggling desperately for survival against a far-more-lethal kind of Radroach, alicorns that have been driven insane, a security system that keeps talking about quelling riots with Gatling MEWs, and even her own crewmates. And with their only hope for escape hidden somewhere in the vast underground city that is Stable 16, things are looking very bleak indeed. And to top it all off, Silver's starting to notice something very deeply wrong about Stable 16. Something they may have to face if they want to see the sky ever again... 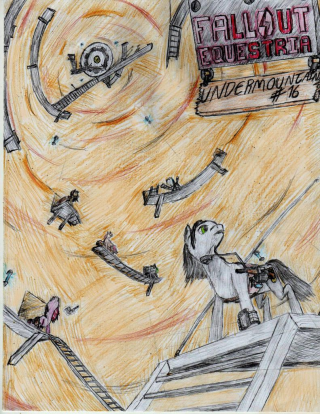