Check out The Foally of Man, a podcast featuring Chris the Brony and Robert the non-Brony as they explore Fallout: Equestria chapter by chapter. Watch/listen on YouTube, Libsyn, Twitter, and PodBean.
MrAlterad

Added:
Monday, October 6th, 2014
Last Update:
Wednesday, October 15th, 2014
Favorited By:
Be the first to favorite this story!
Dark, Crossover, Adventure
In the midst of the war that destroyed Equestria, a family of ponies sought to change its fate, Equestria's destiny, and succeeded. 200 years have passed, and events are on the rise in Equestria. As conflicting forces begin to move, a mare, separated from her home, finds herself being haunted by a 250 year quest pursued by her family line. Enemies that seek to destroy everything her family has worked for pursue her. Gathering what aid she can trust, she seeks out the answers of her lineage, her family legacy, in the seas of Equestria, and her part in Equestria's future. 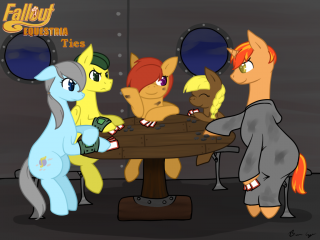