Check out The Foally of Man, a podcast featuring Chris the Brony and Robert the non-Brony as they explore Fallout: Equestria chapter by chapter. Watch/listen on YouTube, Libsyn, Twitter, and PodBean.
Digital Ink

Added:
Tuesday, November 4th, 2014
Last Update:
Tuesday, June 26th, 2018
Favorited By:
Be the first to favorite this story!
Sad, Dark, Crossover, Adventure, Alternate Universe
Twenty years ago, Stable 33 opened it's door to the wasteland. Due to a plague ravaging half of the population, the Stable had to limit contact to the outside world through limited trade. Ember Blaze, a maintenance pony from Stable 33, finds himself leaving the safety of the Stable in search of his only family left and gets caught up in something bigger than a simple rescue mission. 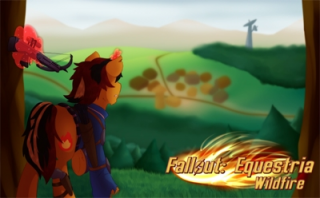