Check out The Foally of Man, a podcast featuring Chris the Brony and Robert the non-Brony as they explore Fallout: Equestria chapter by chapter. Watch/listen on YouTube, Libsyn, Twitter, and PodBean.
vadram

Added:
Monday, December 22nd, 2014
Last Update:
Friday, July 3rd, 2015
Favorited By:
Be the first to favorite this story!
Dark, Crossover, Adventure, Alternate Universe
This events of the story take place after the events of kkat's, [url=http://www.fimfiction.net/story/119190/fallout-equestria]Fallout Equestria[/url]. WARNING: THIS STORY AND THE DESCRIPTION CONTAINS SPOILERS FROM THE ORIGINAL FICTION Over two hundred years ago, war broke out between Equestria and its satellite states, and the Zebra Empire. It was a long a bloody war, with great casualties on both sides. As its usually the case with wars, great scientifically progress had been made in order for a side to get the upper hoof in the battles. Among the crowning technological achievements there were the megaspells. Insanely powerful magics that allowed for literally the control over life and death on an unprecedented scale. Eventually both sides fired their megaspells, and the world ended. Some survived in underground bunkers called stables, while others managed to somehow survive in that harsh inhospitable world, and slowly they all started to retake the world. Many did not amass to much, some settlements were formed or reclaimed, but now, five years after the cloud cover was broken, two expansionist nations, in the truest sense of the words, finally had they borders meet. Expect at least two chapters per week. [rule] EDIT: Dec 9, Got a really good proof-reader and he will help me correct some of the mistakes I made i[s]n the first 2 chapters[/s]. Also working on a cover image. 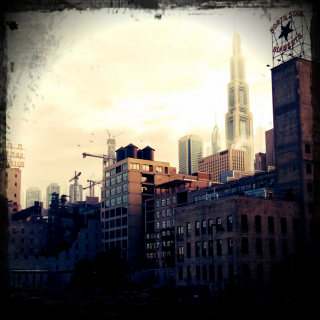