Check out The Foally of Man, a podcast featuring Chris the Brony and Robert the non-Brony as they explore Fallout: Equestria chapter by chapter. Watch/listen on YouTube, Libsyn, Twitter, and PodBean.
Musica

Added:
Saturday, June 6th, 2015
Last Update:
Friday, August 7th, 2015
Favorited By:
Be the first to favorite this story!
Romance, Dark, Crossover, Adventure
Down below the Crystal Empire, lies a Stable that has been undisturbed for years. Now, after a devastating attack, 6 friends must learn how to survive in the Wasteland that was once Equestria. The six friends will journey these lands, growing closer together, meeting people that may or may not help them, and finding each other. The six friends also learn that just because they are striving towards a place for their fellow stable dwellers, doesn't mean they won't have sins in the end. 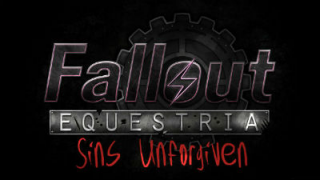