Check out The Foally of Man, a podcast featuring Chris the Brony and Robert the non-Brony as they explore Fallout: Equestria chapter by chapter. Watch/listen on YouTube, Libsyn, Twitter, and PodBean.
Dice Warwick

Added:
Thursday, July 2nd, 2015
Last Update:
Friday, August 2nd, 2019
Favorited By:
Be the first to favorite this story!
Dark, Adventure, Alternate Universe
Cover Art by [url=http://mylittlesheepy.deviantart.com/]MylittleSheepy[/url] When the war came to it's end, the destruction of Equestria was overwhelming. Entire cities were wiped off the map in but a flash, the once beautiful lands became poisoned and twisted. However, life still went on, only with a new war to fight. An unending war for survival against the wasteland itself took over. And war? War never changed. Amidst the worst hit during the apocalypse, the Islands of Marewaii were left as shadows of their former selves. Being the center port for Equestrias naval campaign, when the bombs flew, the Islands were a priority target for the Zebras. Megaspells of Balefire bombarded the big island, and the magical fallout that followed covered each of the others. The magical destruction was so great that the air itself became poisoned, a poison that persisted for over two hundred years. But like with the rest of Equestria, life continued to go in. Deep under the cities during the way, a vast metro system had been made. It was constructed both for transportation, and for emergency shelter in case the war ended in a balefire rain. Tens of thousands of ponies had fled underground, unsure if they would even survive the end of the world at all. Many closer to the surface didn't, but the ones that did went on to rebuild society in their new underground home. Over two hundred years later, our story picks up. A mirage pony mare named Vibraphone Echo, received a message about a job. This "search and rescue" job will pay a years worth of bits as payment. A simple job, one that gave her a bad feeling, but worth too many bits to pass up. They say that war never changes, but ponies do through the paths they chose to walk. 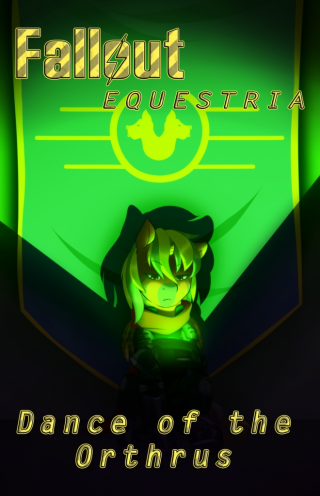