Check out The Foally of Man, a podcast featuring Chris the Brony and Robert the non-Brony as they explore Fallout: Equestria chapter by chapter. Watch/listen on YouTube, Libsyn, Twitter, and PodBean.
Almanac Pony

Added:
Monday, October 12th, 2015
Last Update:
Friday, May 24th, 2019
Favorited By:
Be the first to favorite this story!
Tragedy, Dark, Crossover, Adventure, Alternate Universe
Years before Littlepip stepped from Stable 2, the Wasteland greeted all ponies with it's usual contempt. Tome Tale and his silent partner, Stranger, live day to day on their next bag of caps, until they stumble into something bigger than themselves. Bigger than the whole of Equestria. Based on Fallout: Equestria by Kkat. This story follows Tome Tale. A scholastic pony that prefers talking to fighting. Though he also has a bad habit of pissing ponies off. A pony with a hidden past, in an effort for caps he gets himself tangled in something not necessarily good for his health. A Wastelander that had long since hardened himself to the horrors of the Wasteland, the ice in his heart threatens to melt as friends are made, loves are lost, and the Wasteland and Stars yield their most darkest of secrets. NOTE 1: Only the original Fallout: Equestria is considered canon officially. I will however do my level best to not cross over with other large fics such as Projects Horizon or Pink Eyes. While I will not mention such events in my story, I will do my best not to negate them so readers may consider whatever they wish to be canon from other works. (This is not set in stone, and if I am faced with a situation where I must disregard the interpretations of PH or PE to further my story, I shall without qualm or hesitation, but I do not think such a scenario is likely. I have planned this story out heavily, and do not believe any of it will conflict with such stories.) NOTE 2: Tome Tale is an Earth Pony in the Wasteland. Too many stories are unicorns from stables, or other things like that. I wanted to write this story different from other ones. Tome Tale grew up in the Wasteland, he has already become hardened. Too often we are faced with an innocent character fighting the corruption of the Wasteland both internally and externally, and such story lines are very well written and received, but they ARE overused. Tome Tale is not such a story. His is a story not of fighting corruption in himself, but of redemption that can never be found. A heart which is cold, becoming warm again, and a pony such as him, learning what it means to be alive. I hope you enjoy the story, and please, leave a comment. Your attentions will fuel me. :3 NOTE 3: Tags and things will be changed as the story progresses. 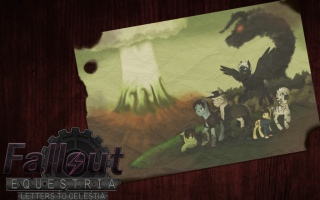 Chapter Five - Dear Princess Celestia, Does Our Past Define Us?
Feb 25th, 2016

Chapter Eight - Dear Princess Celestia, Can You See the Stars in Our Eyes?
Mar 5th, 2017