Check out The Foally of Man, a podcast featuring Chris the Brony and Robert the non-Brony as they explore Fallout: Equestria chapter by chapter. Watch/listen on YouTube, Libsyn, Twitter, and PodBean.
Somber

Added:
Sunday, November 15th, 2015
Last Update:
Tuesday, January 26th, 2021
Favorited By:
Be the first to favorite this story!
Adventure, Crossover, Dark, Drama
It's been a year since the events of Project Horizons. The Hoof is improving and doing better, and yet Scotch Tape feels increasingly adrift in a world that doesn't seem to know her. That doesn't seem to care. And she's not the only filly feeling the same way. Majina, who lost both her mother and brother, has little in the Hoof to care for her either, living day to day in the zebra refugee camps for the survivors of the horrible battle for the hoof. Both are left poking through the basement of Majina's mother's home in Chapel, where she collected a number of papers. It is in those papers that star cursed Starkatteri filly Pythia discovers an ominous letter written by the Caesar on the Day of Doom, his last order: 'Blind the Eye of the World'. Pythia knows the only way to learn what that means is to go there herself. She ropes in Scotch Tape and Majina (Because what are they going to do besides sulk and mope?) and makes arrangements to reach the land of Equestria's enemy. Along the way, the half dragon half pony filly Precious demands to come with them. And you don't say no to anything dragony. Together, they'll travel to a far away land that was also terribly savaged by the war, who's pain and suffering have yet to be known. Together, they'll find out what the zebra Caesar set into motion with his final command. And only together will they be able to save the Homelands. (Author's note: While helpful to read Horizons, most of the characters and events in Homelands do not require it. There may occasionally be references to Horizons and the original Fallout, but a new reader should be okay. Also, if you like my writing, please drop me a bit or two at my [url=https://www.patreon.com/Somber?ty=h]Patreon[/url]. Really, you can't imagine how much it helps. 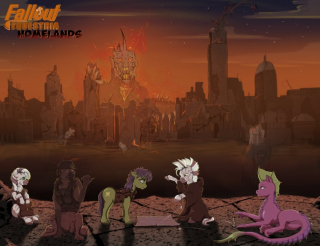