Check out The Foally of Man, a podcast featuring Chris the Brony and Robert the non-Brony as they explore Fallout: Equestria chapter by chapter. Watch/listen on YouTube, Libsyn, Twitter, and PodBean.
Visualpony Thenarrator

Desperate times call for desperate measures... or so they say... The war with the Zebras brought out the best in some, and the worst in others... Now that I see this wasteland, I wonder to which side I belong... I had always been loyal to Princess Luna, even though I had a record of disobeying orders. It was this quality to think for myself however, that she valued in me. Eventually, I was given command of a Unit that only answered to the Princess, operating outside of the usual chain of command... I was proud and scared at the same time, that a being such as the Princess of the night entrusted me with such a task. One night however, it all fell apart, and now only my friend Firestorm and I remain of what was once Equestrias most secret Platoon. Both of us wonder what will happen to us now, where our place in this world is, and if what we did during the war was really the right thing... Sometimes I think it is like that stallion on the radio always says: The one truth of the wasteland, is that everypony has something they regret. 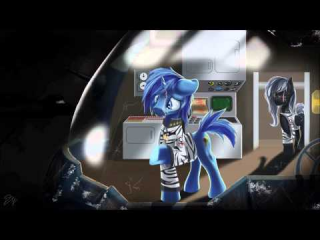