Check out The Foally of Man, a podcast featuring Chris the Brony and Robert the non-Brony as they explore Fallout: Equestria chapter by chapter. Watch/listen on YouTube, Libsyn, Twitter, and PodBean.
RuinQueenofOblivion

Added:
Friday, March 18th, 2016
Last Update:
Sunday, July 12th, 2020
Favorited By:
Be the first to favorite this story!
Adventure, Crossover, Drama, Sci-Fi
Five years after the events of Fallout: Equestria, Stable 26 is opened to the wasteland and Ruby Starlight steps out into the wastes for a year long adventure to see if she can survive. However she finds herself in the middle of one of the worst wars Equestria has seen in 200 years. Can Ruby survive or will she be swallowed up by the Wasteland? 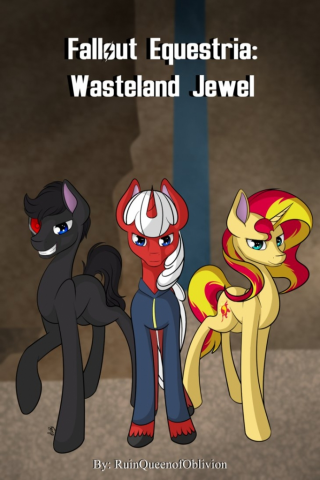