Check out The Foally of Man, a podcast featuring Chris the Brony and Robert the non-Brony as they explore Fallout: Equestria chapter by chapter. Watch/listen on YouTube, Libsyn, Twitter, and PodBean.
SFMediaWriter

Added:
Wednesday, May 25th, 2016
Last Update:
Thursday, June 29th, 2017
Favorited By:
Be the first to favorite this story!
Alternate Universe, Crossover, Dark, Thriller
The pre-war pony-folk enjoyed a mostly peaceful existence. That all changed, however, when the megaspells struck and the population of Equestria was forced to go underground, or die. Shimmer Jubilee, a nurse from Crystal Grove was one of the lucky few who were allocated a space in Stable 45. There she remained for two centuries, frozen in time as the world above went mad. But when raiders attack, she has no choice but to flee the safety of the Stable. Join a new cast of characters as they travel the Equestrian Wasteland and search for a better tomorrow! 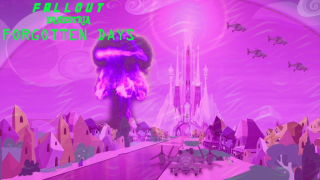