Check out The Foally of Man, a podcast featuring Chris the Brony and Robert the non-Brony as they explore Fallout: Equestria chapter by chapter. Watch/listen on YouTube, Libsyn, Twitter, and PodBean.
Glacier_Mane

Added:
Tuesday, June 7th, 2016
Last Update:
Wednesday, October 19th, 2016
Favorited By:
Be the first to favorite this story!
Adventure, Alternate Universe, Crossover, Dark, Sci-Fi, Tragedy
Stable 744 is located in a region that is north of the Crystal Empire ruins. The Stable itself rests in a cave that is in the scandineighvian mountain range. This Stable housed residents and scientists from the Equestrian University of Intelligence and Arcane Sciences (EQUIS). This Stable had a dark intent that only the scientist knew of know as Project Equis. Soon the decision to open Stable 744 fell on the shoulders of a newly elected OverStallion Glacier Mane. Upon opening the Stable door the frights of the Equestrian wastes flood into his life as well as the Stable. Who is Friend? Who is Foe? What is Project Equis? How do we Maintain life outside the Stable? 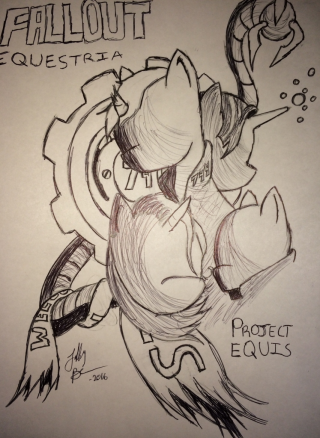