Check out The Foally of Man, a podcast featuring Chris the Brony and Robert the non-Brony as they explore Fallout: Equestria chapter by chapter. Watch/listen on YouTube, Libsyn, Twitter, and PodBean.
Vaatidj

Added:
Sunday, June 12th, 2016
Last Update:
Wednesday, December 13th, 2017
Favorited By:
Be the first to favorite this story!
Adventure, Alternate Universe, Dark
Seventy-five years have past since the bombs fell in Equestria, and ponykind struggles to hold onto whatever there is left. Murder is a common occurrence, and what little law there is left is held by the Steel Rangers and Grand Pegasus Enclave. Even then, the wrongs of one pony is rarely a reason for the Wasteland to fear them. Then came the Bloody Angel, who's cruelty and hatred of both the Enclave and Steel Rangers made him feared by everyone. No one has seen their face, or at least none that are still alive. Now the Wasteland hunts him, looking for anyone who even has the slightest chance of being the killer. In the two years since he his first known murder, I've managed to stay safe. Alone, away from any settlement, and paralyzed in the lower half of my body, you think I would be the last pony to be placed as a suspect... ... but the Wasteland has a way of ruining your life, and my father's past is about to do the same to mine. 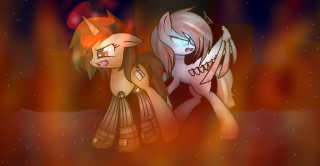