Check out The Foally of Man, a podcast featuring Chris the Brony and Robert the non-Brony as they explore Fallout: Equestria chapter by chapter. Watch/listen on YouTube, Libsyn, Twitter, and PodBean.
Ron Jeremy Pony

Added:
Tuesday, April 13th, 2021
Last Update:
Tuesday, April 13th, 2021
Favorited By:
Be the first to favorite this story!
Smalls, or Small Fry if he's in trouble, is certainly several things. A decent pony, a former Stable Dweller, a good friend, and certainly a Sparkle Cola drinking fiend. If there's a Sparkle Cola around he will find it, and he will drink it. His quest for a Sparkle Cola has lead him to what was once the happiest place in Equestria, Sparkle Cola World. But the Theme Park isn't the happy place it once was, and now the responsibility of running it, and deciding how it will interact with the world at large is squarely on the shoulders of Smalls and his friends. Join Smalls in this odd ball adventure in the Wasteland, and see if he can maintain being the decent pony he is, or if he's destained to become the next terror of the Wasteland. 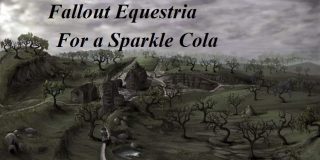