Check out The Foally of Man, a podcast featuring Chris the Brony and Robert the non-Brony as they explore Fallout: Equestria chapter by chapter. Watch/listen on YouTube, Libsyn, Twitter, and PodBean.
Equestrian Wastelander

Added:
Tuesday, April 12th, 2022
Last Update:
Wednesday, March 23rd, 2022
Favorited By:
Be the first to favorite this story!
Two ponies. Two tales. One Wasteland. After a hundred years in a land devastated by war and radiation, hope is all but lost. That is until two very special ponies begin to make their mark. First is The Wanderer, a rare breed of pegasus, who awakens in Little Horn Valley and with a past shrouded in mystery, attempts to regain his memory and help any pony he can along the way. And Midnight Sonata, another pegasus, born and raised in Tenpony Tower. Her dream is to rise up from the downtrodden life she was given and one day have her songs heard across the Wasteland. Can these two ponies bring hope back to the wasteland or will they end up being conquered by it? Authors note: This story is inspired from the original [i]Fallout Equestria[/i] by Kkat. Please bear in mind that this is set 100 years before their incredible story. 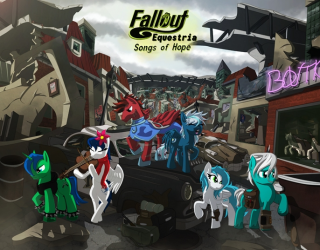