Check out The Foally of Man, a podcast featuring Chris the Brony and Robert the non-Brony as they explore Fallout: Equestria chapter by chapter. Watch/listen on YouTube, Libsyn, Twitter, and PodBean.
Captain Literal

Added:
Tuesday, May 1st, 2012
Last Update:
Sunday, July 8th, 2012
Favorited By:
Be the first to favorite this story!
Adventure
This story is about an young pegasus, named Lightning, who starts out in the enclave city of Lightning Hoof. She escapes the city after being framed to being a traitor, along with her friend Polaris, after some time in the wasteland, she finds out about Operation 6011, a enclave plot, and sets out to stop it. i have somber to thank for this, without her help it couldn't have been nowheres near as good as it is now. 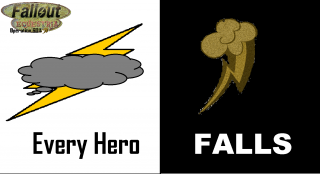