Check out The Foally of Man, a podcast featuring Chris the Brony and Robert the non-Brony as they explore Fallout: Equestria chapter by chapter. Watch/listen on YouTube, Libsyn, Twitter, and PodBean.
FireStorm2247

Added:
Friday, July 13th, 2012
Last Update:
Monday, April 18th, 2016
Favorited By:
Be the first to favorite this story!
Dark, Crossover, Adventure
Nova, a mare pegasus pony, was born and raised in a place of safety and security by a proud and noble family. Stable 181, a Stable dedicated to teaching and preserving the pre-war virtues known as the Elements of Harmony, allowed its residents to live a life of peace, knowledge, and honor. But when the Stable falls under attack by a raider war party, Nova and the remaining residents are cast out into the Equestrian wasteland. Without a home, Nova and the remaining Stable survivors must band together to make a living out in the wasteland. They must start from scratch, find a home, learn to trade and explore, and establish a foothold in the wastes. But during her efforts to help her people, Nova comes across strange pre-war recordings and artifacts pointing to a hidden pre-war nation. And when a mysterious pony questions Nova’s virtue and beckons for her to discover what the writings portray, Nova and her closest friends find themselves cast into a war fought to secure a legacy left behind by a secret pre-war society. Nova’s quest leads her to test her heart against the unrelenting force of the wasteland, to discover the meaning of the word honor, and to seek out and unlock a concealed pre-war secret, revealing to Nova that she is a part of something greater than she could have ever imagined. (This story is set twenty-five years before the adventures of Littlepip.) 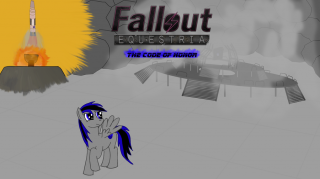