Check out The Foally of Man, a podcast featuring Chris the Brony and Robert the non-Brony as they explore Fallout: Equestria chapter by chapter. Watch/listen on YouTube, Libsyn, Twitter, and PodBean.
Eventorizon

Tragedy, Sad, Dark, Crossover, Adventure, Alternate Universe
Stable Seventeen. A fish tank in reverse. Safe haven for two hundred and fifty ponies to survive away from the balefire radiation of the Pony-Zebra war. But when the glass breaks and the water drains in how quickly could you adapt to survive in the equestrian wasteland when nothing is as it should be? Faced with the death of her entire stable, Francium sets out to repair the damage she helped cause, return those who are enslaved to their rightful homes and discovers that Stable-Tec's Research & Development department really did take Project Nightmare one step too far. 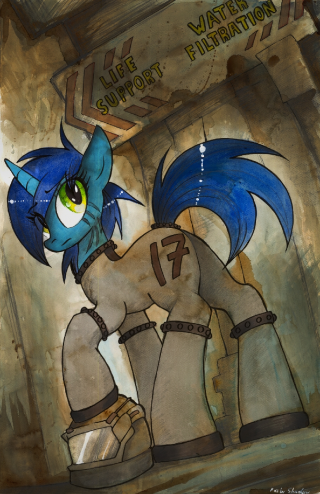