Check out The Foally of Man, a podcast featuring Chris the Brony and Robert the non-Brony as they explore Fallout: Equestria chapter by chapter. Watch/listen on YouTube, Libsyn, Twitter, and PodBean.
Jacoboby1

Added:
Monday, September 17th, 2012
Last Update:
Tuesday, June 11th, 2013
Favorited By:
Be the first to favorite this story!
Romance, Tragedy, Dark, Comedy, Crossover, Adventure
Almost a decade before Littlepip left Stable 2 a different set of heroes was fighting in the area around Dodge Junction. Calling themselves The Wanderers this mercenary group is dedicated to protecting the ponies of Dodge. Led by the capable Drift, the group comes across a strange discovery. A young mare with a pipbuck claiming to be in search of her brother stumbles into their lives. But it appears that somepony else is after the mare, it's up to the wanderers to protect their new-found friend from the evil of the wasteland. But as the dangers continue, will Drift be able to protect his group from the horrors of the wasteland? Or will the group become those very same horrors? 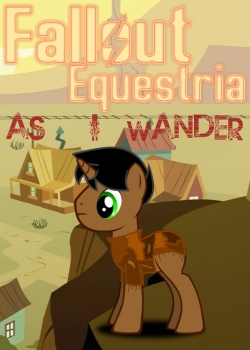