Check out The Foally of Man, a podcast featuring Chris the Brony and Robert the non-Brony as they explore Fallout: Equestria chapter by chapter. Watch/listen on YouTube, Libsyn, Twitter, and PodBean.
S3rb4n

Added:
Wednesday, October 3rd, 2012
Last Update:
Tuesday, January 21st, 2014
Favorited By:
Be the first to favorite this story!
Set up in the universe of Fallout Equestria, Viva Las Pegasus tells the story of Farsight, a Stable Pony cast into the wilderness of the wastes. The City of New Pegasus remained unharmed by the bombs and the megaspells, and has been growing ever since. Beneath the city lights, the dwellers of Stable 188 live their lives ignorant of what lies above. Every once in a year, a dweller gets cast away into the Wasteland. Meet Farsight, a pony from the Stable 188, who suffers such terrible fate, and watch him rise to power in a post-apocalyptic mobster world... just to fall back into oblivion. 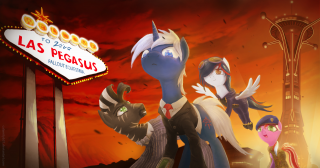