Check out The Foally of Man, a podcast featuring Chris the Brony and Robert the non-Brony as they explore Fallout: Equestria chapter by chapter. Watch/listen on YouTube, Libsyn, Twitter, and PodBean.
Golden Tassel

Added:
Tuesday, November 6th, 2012
Last Update:
Friday, May 2nd, 2014
Favorited By:
Be the first to favorite this story!
Tragedy, Dark, Crossover, Adventure
A pony sits alone in a detention cell, waiting for his sentence to be carried out. The cell is cramped, and the walls and floor are cold and hard, but the cot is soft and warm, and the pony wants to just stay there—safe and secure. A mare is dead, and a foal orphaned. There\'s only one punishment for what happened. A security mare comes to collect him, to get rid of what\'s not wanted. She takes him to the stable door and opens it. It\'s dark on the other side beyond the light cast out from the stable; and the exile hesitates, shaking and forcing back tears. Security threatens him to keep moving, to not look back. Slowly, the exile moves down the ramp and across the threshold into the world outside. The door closes with a grating screech of metal on metal. Bolts lock into place. The exile\'s life is over. 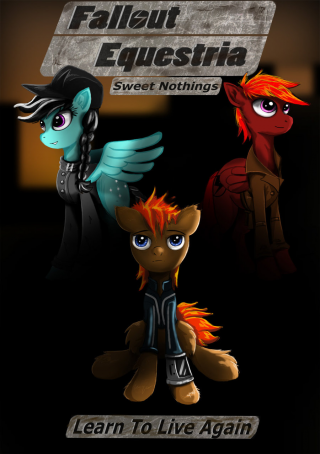