Check out The Foally of Man, a podcast featuring Chris the Brony and Robert the non-Brony as they explore Fallout: Equestria chapter by chapter. Watch/listen on YouTube, Libsyn, Twitter, and PodBean.
Mono Rainbow

Added:
Tuesday, January 15th, 2013
Last Update:
Thursday, November 7th, 2013
Favorited By:
Be the first to favorite this story!
Crossover, Adventure
A Pegasus pony named Topaz Spectrum, who has been born into a non-violent society with little knowledge of what the Equestrian Wastelands hold. At the age of 24, Topaz is sent out into the wastelands to makes friends or enemies and at the same time choose the future and/or fate of his home, Chance; an expanding city off of the coast of Vanhoover. Topaz also wishes to uncover his origins and the details of those he has never seen before in his life; his own parents. - - - This story is rated Teen for gore, strong language, and sexual content. (I don't think this is a perfect fan-fic, but I do encourage CONSTRUCTIVE CRITICISM and I WILL potentially delete comments of out-of-the-blue rudeness.) 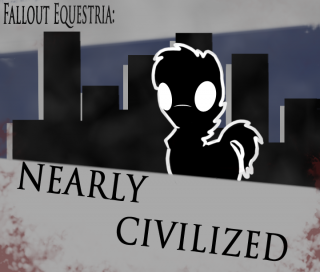