Check out The Foally of Man, a podcast featuring Chris the Brony and Robert the non-Brony as they explore Fallout: Equestria chapter by chapter. Watch/listen on YouTube, Libsyn, Twitter, and PodBean.
John Colt

Added:
Sunday, April 7th, 2013
Last Update:
Monday, September 1st, 2014
Favorited By:
Be the first to favorite this story!
Dark, Crossover, Adventure, Alternate Universe
My name is Aideen, I was a slave for the Crimson Company. As I grew up learning Stable-maintenance my talent has been used to hack terminals and the likes. The story starts with them discovering a facility by "Gaia Prevails", a resistance-group especially known for stealing and destroying research and weapons on both sides during the later half of the war. Of that team I am the only survivor; they were all slaughtered by - and this is where it gets weird - an evil bodiless entity, I believe is Nightmare Moon. After having a good bloodbath she planted a weird type of memory-orb in my saddlebags and let me go. Being a free pony has its own set of challenges, getting a mission from Nightmare Moon and keeping a slaver-superpower from getting all that fancy tech from the Gaia Prevails facility doesn't help with that either. I don't think I'm going insane, but then again 90% of those who are deny it. 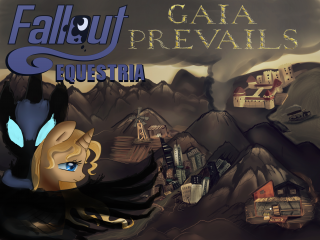