Check out The Foally of Man, a podcast featuring Chris the Brony and Robert the non-Brony as they explore Fallout: Equestria chapter by chapter. Watch/listen on YouTube, Libsyn, Twitter, and PodBean.
SqueakAnon

Prodigious Peddler is a trader in the Equestria wasteland, going from day to day and sale to sale by his wits and his revolver, facing ghouls, slavers and raiders in the remnants of the world. But in his travels he comes across a strange mare in a cloak asking for passage out of Flank. After some convincing he accepts, But as they travel through the wastes and deal with its denizens, the pair finds they both have secrets of their own, and pasts coming to quickly catch up with them. 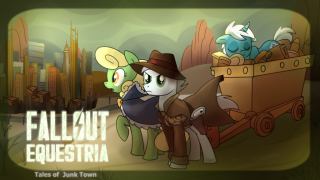