Check out The Foally of Man, a podcast featuring Chris the Brony and Robert the non-Brony as they explore Fallout: Equestria chapter by chapter. Watch/listen on YouTube, Libsyn, Twitter, and PodBean.
luckytheseal

Added:
Tuesday, June 25th, 2013
Last Update:
Sunday, May 18th, 2014
Favorited By:
Be the first to favorite this story!
Tragedy, Crossover, Adventure, Alternate Universe
Imagine a land that wasn't shades of grey. A world where the sun shone brightly and the plants grew more vibrantly than ever. Welcome to the Compact Archipelago, once it was a zebra colony, now it's governed by a near ancient agreement, Zebra villagers feed the remnants of the Equestrian Royal Navy, and the navy protects the villagers from pirates. Seems simple right? Kill pirates get food, while looking for pirates, kick back and enjoy the surf, fresh air, the tropical fruit, and the sun... Wrong! The entire "relaxing" thing is quickly killed by the fact their are mine fields, 20 foot swells, diseases, the fact that the pirates are every bit as well armed as you, and you know... THE OCEAN IS IRRADIATED! Now some group of pegasus ass-hats decked out in black just show up, blow up one of our boats, and occupy an island. Fuck. That. It's war! --- this is for the 500 member contest under "at the sea", but the other two sort of come in... oh and that hasty phottoshop job that barley passes as cover art was made by me. 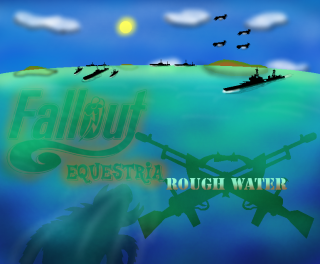