Check out The Foally of Man, a podcast featuring Chris the Brony and Robert the non-Brony as they explore Fallout: Equestria chapter by chapter. Watch/listen on YouTube, Libsyn, Twitter, and PodBean.
SawyerAuthorPony

Added:
Tuesday, June 25th, 2013
Last Update:
Thursday, November 21st, 2013
Favorited By:
Be the first to favorite this story!
Sad, Dark, Crossover, Adventure, Alternate Universe
Many of us believe that Fate is an uncontrollable force. That the bullet we should keep an eye out for is not the one labeled with our name, but the bullet labeled 'To whom it many concern.' This is the story of an individual who has conquered fate. Who now determines what time is appropriate for him die. 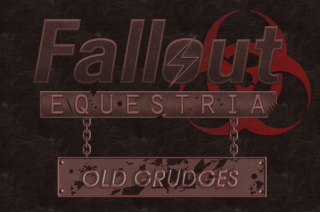