Check out The Foally of Man, a podcast featuring Chris the Brony and Robert the non-Brony as they explore Fallout: Equestria chapter by chapter. Watch/listen on YouTube, Libsyn, Twitter, and PodBean.
ThatDarnPony

Added:
Tuesday, June 25th, 2013
Last Update:
Friday, January 24th, 2014
Favorited By:
Be the first to favorite this story!
Dark, Crossover, Adventure, Alternate Universe
The Crystal Empire. Most in the south thought it was a fairy tale, even before the war. Their inclusion in those violent times arrived thanks to their resources- zebra and pony alike hungered for the kingdoms untapped powers. More than a century after the Last Day, this fanciful idea of an immense, gleaming nation persists. Only a few brave travelers have returned from the frigid north past the Crystal Mountains, weaving tales of endless emptiness, unforgiving cold, and a single broken city with strange items and snipers with xenophobia. They are the only ones with any witness to what those wastes hold, as none of the residents have ever been seen in the south beyond rumor or shallow graves. For Snapshot, however, he is jaded against the folklore. He knew what the crystal city of Resilience really was. To him, all the story books and campfire tales are a silly history; polished tales of what his ancestors once were. Cast southward, he will be one of the few crystal ponies in over a century to see the world beyond the mountains. Embarking along The Long Trot, the only way known to reach the southern wasteland from Resilience, he must prove that the treacherous journey can be survived... And can end in immense profit from his kin for those willing to suffer it. If he does not, the atrophy of already dwindling trade will starve the city, and the once powerful nation will be abandoned to the cold and ire of an environment that has sought to claim it for many years. Yet the ignorant southern ponies still cling to the old hatreds, and the old technology, that annihilated the concept of peace. The powers that fueled the Last Day linger still, in weapons, in Stables, and in souls. Entwined in the constant squabble of survival, Snapshot is about to discover the truth behind the separation between north and south. The sins of the old days are not easy to forgive. Especially for a pony of the Crystal Empire. 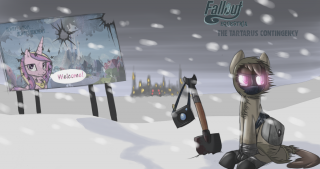